[...] A conclusion has been drawn in this respect that arrowheads are found only in male graves (Gurova, 2002, 247-260; Sirakov, 2002, 213-246). Flint artefacts from burials can not be related to a possible function as tools or gifts beyond this world, and they ought to be semantically interpreted as divine symbols of the supreme deity of the prehistory period – the Sun. The thunder is the weapon of the God of Heaven in all religions and the place, which he strikes with the lightning, becomes sacred, and the stricken people become initiated. It was believed that the so called “thunder stones”, most of which are nothing else but prehistorical flints, are the arrow points of the lightning and they have been honoured and preserved with reverence (Eliade, 1995, 77). This idea is vividly illustrated in the Roman faith and ritual: “The oak tree has been dedicated to Zeus-Jupiter, because the lightning strikes most often this tree. The oak at the Capitolian Hill belonged to Jupiter Feretrei, who strikes, who slaggers, called as well Jupiter Lapis, represented by a flint. While making a contact, the priests killed the sacrificial pig with a flint” (Eliade, 1995, 101-102).

[...] In the traditional Bulgarian rituals and customs, the faith in the magic power of stones is still preserved: “According to the folklore tradition in the fight between the ‘hala’ (mythological female monster or dragon) and other village dragons the dragon throws fire arrows and stones, which result in lightning and thunder. A popular idea is that St. Iliya makes the arrows and gives them to the dragons to fight the ‘hala’. These arrows penetrate 40 ‘arshins’ (1 ‘arshin’=28 inches= 68.75 cm) deep in the earth and they appear on its surface only after 40 days. The arrows are called ‘bozha strela’ (God’s arrow), ‘treshten kamak’ (thunder stone), ‘grom padina’ (something that fell after thunder), ‘strela’ (arrow), ‘grumnato kamuche’ (small thunder stone) and it is believed that they can cure, bring luck and protect from ‘treshtavane’, and also that, evil can not enter a house with such a stone. The stones are tied to children to ensure health and to cure epilepsy” (Georgieva, 1983, 84).

[...] The ‘treskavitsa’ (thunder) according to the folklore tradition is an arrow of fire with a sharp flint edge. When it thunders and there are lightings, “St. Iliya trows these arrows with his bow targeting those men, who have many sins and do not want to take any penitence.” The fallen arrows intrude deep into the earth. If someone finds such arrow, this is good luck, because such an arrow is very curative and protects the house (Marinov, 1981, 63-65). 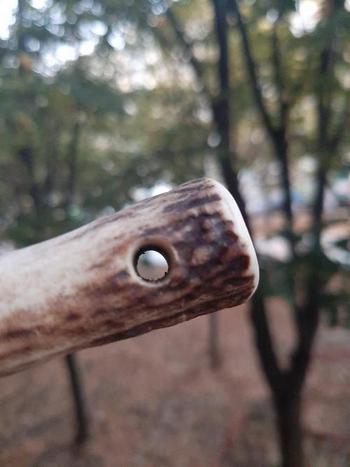